The role of hydrogen has continuously evolved throughout history. But where did it all begin? And what does the research say?

LET’S START AT THE BEGINNING

The history of hydrogen undoubtedly begins with the formation of our universe. After that, hydrogen quickly rose to become the most abundant element in the universe (1). Hydrogen’s status as the most abundant chemical element is most certainly due to it also being the lightest and the simplest element. Hydrogen bonds exceptionally easily to other elements. Hydrogen is found in almost every living thing and is therefore essential for life (2). This also means that unbonded hydrogen is an exceptionally rare find on Earth (3).

Abundance, size, and bondability are hydrogen’s most advantageous characteristics. Because of these advantages, hydrogen is able to diffuse through membranes and enter organelles like the cells’ mitochondria and nucleus. This is part of what makes hydrogen such an effective antioxidant; other antioxidants are not as effective as hydrogen because they lack the ability to target organelles.

The role of hydrogen is constantly changing: from its early beginnings as a combustible gas in the chemistry field to its use in balloons in the aeronautical field and to its potential applications in the medical field. See the figure below for the timeline of hydrogen discovery (4): 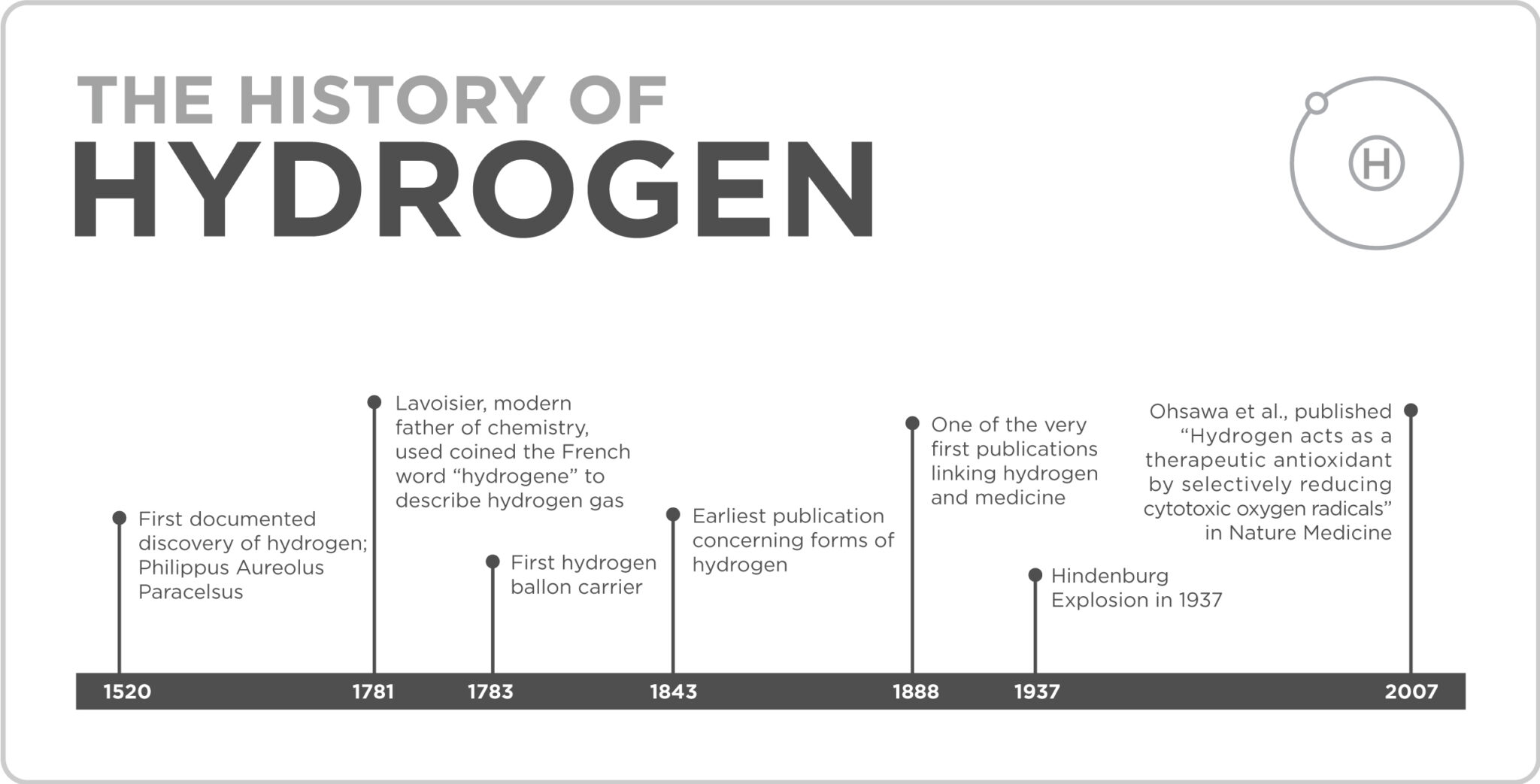 THE BEGINNING OF SCIENTIFIC RESEARCH

Since that very first study, medical and therapeutic studies on hydrogen were sparse until the pivotal point between 1994 and 1998 when research study numbers began to grow steadily. Then, after a pivotal study published in 2007 by Nature Medicine, the study numbers boomed dramatically.

1994: How hydrogen water helps with the psychophysiological reactions of deep water divers (6)

1995: Effect of hydrogen water on reproduction (7)

1998: How hydrogen water can help with gene expression by protecting your body against harmful oxidative stress (11)

Post-2007: Study numbers boom after the 2007 publication in Nature Medicine

The graph below shows the percentage of primary reports published per country. China is undoubtedly dominating the hydrogen study industry by publishing 49% of all research articles. Japan is following close behind China. Interestingly, the U.S. only accounts for 5% of all the total studies, which puts into perspective just how much research is out there and how much more we could learn from other countries. WHAT DID THE REPORTS SAY?

95% of all hydrogen water studies concluded definite positive results. 4% retained a neutral stance in the conclusions, and only 1% reported that the hydrogen was not able to do what they expected it to do. WHO WERE THE STUDY SUBJECTS?

Across all the research studies, rats were the most common study subject. Rats are typically the preferred species for scientific research because they are exceptionally similar to humans genetically, anatomically, and physiologically. Mice came in second, being the preferred test subject for 21% of all scientific studies. Cell culture made up 15% and humans also made up 15% of the study subjects used.

With this vast range of study subjects being used, it is no surprise that 1% of the studies reported a disproved hypothesis, and it is a wonder that 95% of all studies reported definitive positive results. WHICH PARTS OF THE BODY DID THE STUDIES FOCUS ON? The graph below shows the secondary topics that the studies focused on. Interestingly, these studies focused on an incredibly large range of different secondary topics: with 12% focusing on the effects hydrogen has on surgery and transplantation, 7% looking at the effect hydrogen has on cancer, 5% researching its effect on sepsis, and 4% focusing on neuroprotection. Other important topics to highlight include hydrogen’s effect on diabetes, heart disorders, aging, and wound healing. *NOTE: THE 42% OF ALL RESEARCH STUDY TOPICS LABELED AS “OTHER” INCLUDE HYDROGEN’S EFFECT ON: *NOTE: THE 38% OF ALL RESEARCH STUDY TOPICS LABELED AS “OTHER” INCLUDE HYDROGEN’S EFFECT ON: *NOTE: THE 21% OF ALL RESEARCH STUDY TOPICS LABELED AS “OTHER” INCLUDE HYDROGEN’S EFFECT ON:

WHAT ARE THE BENEFITS OF HYDROGEN? Hydrogen has undoubtedly had an interesting history, from its discovery in 1520 to its naming by the father of chemistry himself, Lavosier, in 1781. This was followed by the development of the first balloon carrier, the first publication concerning the different forms of hydrogen in 1843, the first study to note its medical applications in 1888, the Hindenburg explosion of 1937, and finally by the revolutionary 2007 study published in Nature Medicine proving hydrogen’s important benefit to human health.

Across 132 years of scientific research and over 900 research studies, it is impressive to discover how beneficial hydrogen is to the human body. For those interested in the health benefits of hydrogen, look no further than Echo Water™ Machines.